Xi Jinping has backed out of the spotlight as the country faces its worst crisis in years, reflecting the political risks he faces if efforts to contain the virus fail.

WUHAN, China — President Xi Jinping strode onstage before an adoring audience in the Great Hall of the People in Beijing less than three weeks ago, trumpeting his successes in steering China through a tumultuous year and promising “landmark” progress in 2020.

“Every single Chinese person, every member of the Chinese nation, should feel proud to live in this great era,” he declared to applause on the day before the Lunar New Year holiday. “Our progress will not be halted by any storms and tempests.”

Mr. Xi made no mention of a dangerous new coronavirus that had already taken tenacious hold in the country. As he spoke, the government was locking down Wuhan, a city of 11 million people, in a frantic attempt to stop the virus spreading from its epicenter.

The coronavirus epidemic, which has killed more than 800 people in China as of Sunday and sickened tens of thousands, comes as Mr. Xi has struggled with a host of other challenges: a slowing economy, huge protests in Hong Kong, an election in Taiwan that rebuffed Beijing and a protracted trade war with the United States.

Wuhan Coronavirus Map: Tracking the Spread of the Outbreak

The virus has sickened tens of thousands of people in China and a number of other countries.

Now, Mr. Xi faces an accelerating health crisis that is also a political one: a profound test of the authoritarian system he has built around himself over the past seven years. As the Chinese government struggles to contain the virus amid rising public discontent with its performance, the changes that Mr. Xi has ushered in could make it difficult for him to escape blame.

“It’s a big shock to the legitimacy of the ruling party. I think it could be only second to the June 4 incident of 1989. It’s that big,” said Rong Jian, a writer about politics in Beijing, referring to the armed crackdown on Tiananmen Square protesters that year.

“There’s no doubt about his control over power,” he added, “but the manner of control and its consequences have hurt his legitimacy and reputation.”

Mr. Xi himself has recognized what is at stake, calling the outbreak “a major test of China’s system and capacity for governance.”

Yet as China’s battle with the coronavirus intensified, Mr. Xi put the country’s No. 2 leader, Li Keqiang, in charge of a leadership group handling the emergency, effectively turning him into the public face of the government’s response. It was Mr. Li who traveled to Wuhan to visit doctors.

Mr. Xi, by contrast, receded from public view for several days. That was not without precedent, though it stood out in this crisis, after previous Chinese leaders had used times of disaster to try to show a more common touch. State television and newspapers almost always lead with fawning coverage of Mr. Xi’s every move.

That retreat from the spotlight, some analysts said, signaled an effort by Mr. Xi to insulate himself from a campaign that may falter and draw public ire. Yet Mr. Xi has consolidated power, sidelining or eliminating rivals, so there are few people left to blame when something goes wrong.

“Politically, I think he is discovering that having total dictatorial power has a downside, which is that when things go wrong or have a high risk of going wrong, then you also have to bear all the responsibility,” said Victor Shih, an associate professor at the University of California San Diego who studies Chinese politics. 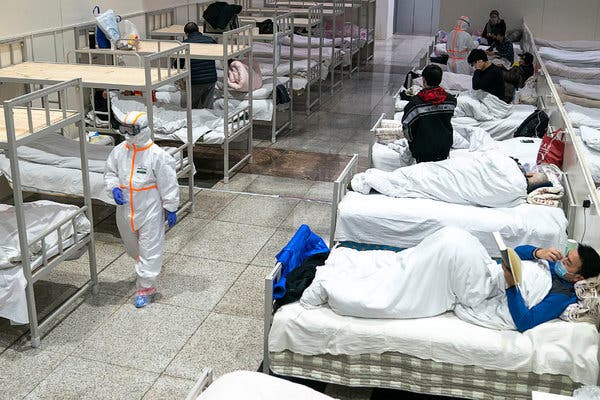 Much of the country’s population has been told to stay at home, factories remain closed and airlines have cut service. Experts warn that the coronavirus could slam the economy if not swiftly contained.

The government is also having trouble controlling the narrative. Mr. Xi now faces unusually sharp public discontent that even China’s rigorous censorship apparatus has been unable to stifle entirely.

The death of an ophthalmologist in Wuhan, Dr. Li Wenliang, who was censured for warning his medical school classmates of the spread of a dangerous new disease in December, has unleashed a torrent of pent-up public grief and rage over the government’s handling of the crisis. Chinese academics have launched at least two petitions in the wake of Dr. Li’s death, each calling for freedom of speech.

State media still portray Mr. Xi as ultimately in control, and there’s no sign that he faces a serious challenge from within the party leadership. The crisis, though, has already tainted China’s image as an emerging superpower — efficient, stable and strong — that could eventually rival the United States.

How much the crisis might erode Mr. Xi’s political standing remains to be seen, but it could weaken his position in the longer run as he prepares to take a likely third term as Communist Party general secretary in 2022.

In 2018, Mr. Xi won approval to remove the constitutional limits on his term as the country’s president, making his plan for another five-year term seem all but certain.

If Mr. Xi comes out of this crisis politically insecure, the consequences are unpredictable. He may become more open to compromise within the party elite. Or he may double down on the imperious ways that have made him China’s most powerful leader in generations.

“Xi’s grip on power is not light,” said Jude Blanchette, the Freeman Chair in China Studies at the Center for Strategic and International Studies.

“While the ham-fisted response to this crisis undoubtedly adds a further blemish to Xi’s tenure in office,” Mr. Blanchette added, “the logistics of organizing a leadership challenge against him remain formidable.”

In recent days, despite a dearth of public appearances, state media have portrayed Mr. Xi as a tireless commander in chief. This week they began calling the government’s fight against the virus the “people’s war,” a phrase used in the official readout of Mr. Xi’s telephone call with President Trump on Friday.

There are increasing signs that the propaganda this time is proving less than persuasive.

The Lunar New Year reception in Beijing where Mr. Xi spoke became a source of popular anger, a symbol of a government slow to respond to the suffering in Wuhan. Mr. Xi and other leaders appear to have been caught off guard by the ferocity of the epidemic.

Senior officials would almost certainly have been informed of the emerging crisis by the time national health authorities told the World Health Organization on Dec. 31, but neither Mr. Xi nor other officials in Beijing informed the public.

Mr. Xi’s first acknowledgment of the epidemic came on Jan. 20, when brief instructions were issued under his name. His first public appearance after the lockdown of Wuhan on Jan. 23 came two days later, when he presided over a meeting of the Communist Party’s top body, the Politburo Standing Committee, which was shown at length on Chinese television. “We’re sure to be able to win in this battle,” he proclaimed.

Back then, the death toll was 106. As it rose, Mr. Xi allowed other officials to take on more visible roles. Mr. Xi’s only appearances have been meeting foreign visitors in the Great Hall of the People or presiding over Communist Party meetings.

On Jan. 28, Mr. Xi met with the executive director of the World Health Organization, Tedros Adhanom Ghebreyesus, and told Dr. Tedros that he “personally directed” the government’s response. Later reports in state media omitted the phrase, saying instead that Mr. Xi’s government was “collectively directing” the response.

Since nothing about how Mr. Xi is portrayed in state media happens by accident, the tweak suggested a deliberate effort to emphasize shared responsibility.

Mr. Xi did not appear on official broadcasts again for a week — until a highly scripted meeting on Wednesday with the authoritarian leader of Cambodia, Hun Sen.

There is little evidence that Mr. Xi has given up power behind the scenes. Mr. Li, the premier in formal charge of the leadership group for the crisis, and other officials have said that they take their orders from Mr. Xi. The group is filled with officials who work closely under Mr. Xi, and its directives emphasize his authority.

“The way the epidemic is being handled now from the top just doesn’t fit with the argument that there’s been a clear shift toward more collective, consultative leadership,” said Holly Snape, a British Academy Fellow at the University of Glasgow who studies Chinese politics.

The scale of discontent and the potential challenges for Mr. Xi could be measured by repeated references online to the nuclear accident at Chernobyl. Many of them came under the guise of viewer reviews of the popular television mini-series of the same name, which is still available for streaming inside China.

“In any era, any country, it’s the same. Cover everything up,” one reviewer wrote.

The Soviet state was foundering when Chernobyl happened, said Sergey Radchenko, a professor of international relations at Cardiff University in Wales who has written extensively on Soviet and Chinese politics.

“The Chinese authorities, by contrast, are demonstrating an ability to cope, a willingness to take unprecedented measures — logistical feats that may actually increase the regime’s legitimacy,” he added.

Mr. Radchenko compared Mr. Xi’s actions to those of previous leaders in moments of crisis: Mao Zedong after the Cultural Revolution or Deng Xiaoping after the Tiananmen Square crackdown.

“He’s doing what Mao and Deng would have done in similar circumstances: stepping back into the shadows while remaining firmly in charge.”

Report: ‘With Cancellation of 21 Million Cellphones…Real Death Toll in China is A Mystery’