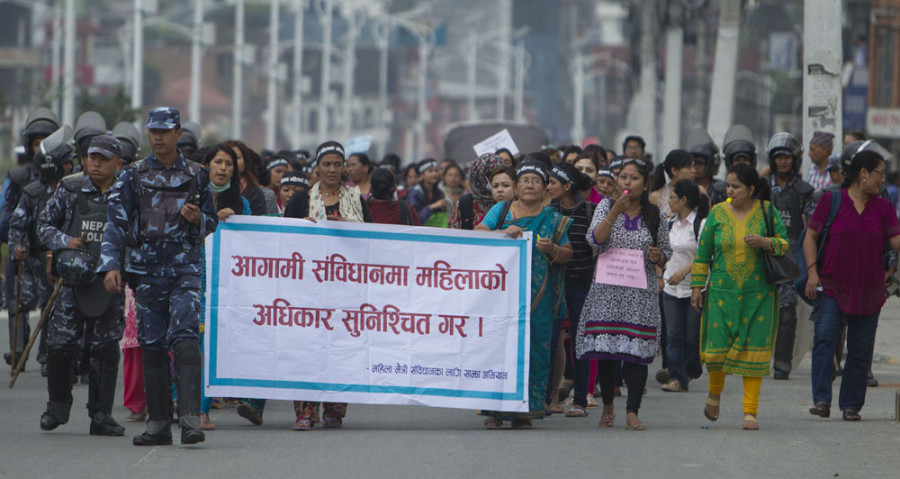 This International Women’s Day marks 25 years of the Beijing Declaration and Platform for Action—one of the most comprehensive documents aiming to remove systemic barriers holding women back from equal participation in both private and public life. After 25 years of activism and groundwork, what is the status of Nepali women in a country that is still very much guided by patriarchal values?

Although there are many issues concerning women’s rights in Nepal that need to be addressed, one that requires urgent attention is the discriminatory citizenship law and constitutional provision which has disenfranchised women and therefore prevented them from passing on citizenship to their children, affecting millions of people across the country.

Over 5.4 million eligible individuals in the country do not have citizenship certificates as a consequence of constitutional provisions, laws, and regulations governing citizenship discriminated by the gender of the registering parent, according to the 2018 US State Department’s country report on human rights practices. Nearly a quarter of the population above the age of 16 is stateless. These include children of unmarried women or those whose fathers are foreign nationals, who have been repeatedly denied citizenship by local officials who claim they will only be able to accept citizenship applications in the mother’s name after the passage of the Citizenship Amendment Bill. The bill which was registered at the Parliament in August 2018 is sitting at the House Committee where members have been debating on provisions for nearly two years.

Meanwhile, the children who are trying to obtain citizenship in their mothers’ names have been effectively told to put their lives on hold. Without citizenship, an individual cannot sit for national-level board exams, opt for university-level education, open a bank account or even seek formal employment. The discriminatory law has a direct impact on the equal status of women who cannot pass citizenship on to their children, as well as on issues relating to the children’s right to nationality, education and employment.

The discriminatory provision is not novel to modern-day Nepal. The first citizenship Act was enacted in 1952. The Act allowed for citizenship to be given to any person who was born in Nepal and their father or mother was a Nepali citizen at the time of their birth as well as to persons with permanent residence living with families in Nepal. This law was applicable until 1963 when the Panchayat regime was introduced, and a new constitution was promulgated. Under the 1963 Constitution, an ordinance concerning citizenship rights was enacted, repealing the Act of 1952. This ordinance later became the Nepal Citizenship Act 1964. This Act made some drastic changes in the citizenship law of Nepal. Citizenship by descent could only be acquired by persons whose fathers were Nepali citizens at the time of the child’s birth.

After much lobbying by activists and rights groups, the ‘or’ terminology was added in both the Constitution and the Act to ensure ‘equality’ amongst men and women to pass on their citizenship—thereby ensuring citizenship can be passed on to those whose mother or father was a citizen of Nepal at the time of his/her birth. However, this clause is succeeded by a provision stating that it would not be applicable to Nepali female citizens married to a foreigner. Further, while the Constitution under Article 11(5) states that a person whose mother is a Nepali citizen but the father is not identified will be provided with citizenship by descent, there is no corresponding provision in the Citizenship Act concerning this clause creating confusion for state authorities to actively implement the constitutional provision. Article 11(7) of the Constitution provides that a person whose mother is Nepali and father is a foreigner is to be provided with naturalised citizenship provided they have permanently resided in Nepal and do not hold a citizenship of another country.

These constitutional and legal provisions are a reflection of the patriarchal and paternalistic societal order that Nepal still is; it is severely impacting the lives of Nepali women and their children. Constant arguments in favour of the Citizenship Act 2006 from elected parliamentarians citing issues of national security with paternalistic and xenophobic undertones have regularly made headlines in recent years. Government officials are still hesitant to provide citizenship to children of unmarried women despite many progressive judgements from the judiciary that recognise this right. Furthermore, naturalised citizenship to children of unmarried women whose fathers are foreigners lies at the discretion of the state.

Unlike citizenship by descent, naturalised citizenship is not a right and depends on the prerogative of the state officials handling the applications to provide it. The law puts the power to confer citizenship to children of Nepali men without reservations unlike the situation for Nepali women—thus making Nepal one of the 53 countries with discriminatory nationality laws. Among the millions affected, the lack of corresponding provisions in the legislation concerning the rights of Nepali women to pass on citizenship to children when the child’s biological father is not identified is also creating immense legal battles for children born in cases of rape, sexual exploitation or those whose biological fathers refuse to acknowledge them.

Notwithstanding the persistent advocacy by women’s rights organisations and those directly affected, Nepal is still lagging far behind international human rights standards concerning the basic right to a nationality. Despite ratification of important international human rights treaties and conventions which clearly set out the state’s obligations to ensure equality in this area, such as the Convention on the Elimination of all Forms of Discrimination Against Women and Convention on the Rights of the Child, failure to adhere to international standards as well as enact the provisions concerning equal nationality rights is a constant reminder of women’s unequal position in the Nepali society.

It is thus important for lawmakers in Nepal to show urgency to remove this discriminatory provision as it has impacted and is impacting the lives of more than half of its population. Any calls for gender equality will be hollow without ensuring equality for Nepali women in the passing of citizenship to their children.