Socialism Sucks: Two Economists Drink Their Way Through the Unfree World by Robert Lawson and Benjamin Powell is an excellent take on why socialism always fails. In fact, it’s a pretty novel take, one that I hadn’t considered before: socialist countries can’t make a good beer and have it readily available for sale.

Sucks is a pretty easy read. Unlike more theoretical or in-depth works about the evils of socialism, such as Capitalism and Freedom and The Road to Serfdom. But, it still contains some excellent points.

To gather the information needed to write it, Lawson and Powell traveled to Sweden, Venezuela, Cuba, China, Russia, Georgia, and a socialist meeting in the USA.

They describe Sweden as a non-socialist welfare state, a description that would surely annoy people like AOC and Bernie who use Sweden to describe how their socialist policies would work. But, as the authors inform their readers, Sweden is not a socialist country! Yes, it’s a welfare state with high taxes. But free-enterprise and individual rights are respected, which is why Sweden has a vibrant economy. 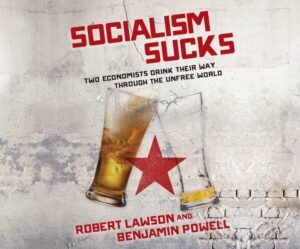 After Sweden, Lawson and Powell travel to real socialist countries: Venezuela, Cuba, and China. They wanted to go to North Korea, but decided that wouldn’t be safe. Other than China, which has transitioned away from socialism in some respects, each one of those countries was an absolute hellhole. The people were starving and poor, food was scarce and tasted terrible, everything was decrepit other than the exclusive government resorts, and economic improvement was near-impossible. It’s amazing the American socialists they describe meeting at the end of the book could ever even think about supporting such a system.

Georgia, however, was a welcome change in tone from their visits to socialist nations. Around the year 2000, it transitioned away from its post-Soviet socialist system and towards being a libertarian paradise. Big Government faded away as individual rights and free-market reforms blossomed. As a result, the Georgian economy is booming and it is incredibly economically free. It’s amazing what a difference the free market makes!

Overall, Socialism Sucks is about how socialism puts countries in dire economic straights. Lawson and Powell distill that down into a simple metric: how hard is it to get a good beer? In Sweden, the beer was expensive but good. In socialist countries, it was just about impossible to get a good beer and even if beer was to be found, variety was non-existent. In Georgia and the US, however, beer was cheap, varied, and plentiful. Capitalism, with its focus on consumers and consent, leads to the creation of plentiful and excellent products. Socialism just leads to misery. You can’t even get a good beer!

I first heard of Socialism Sucks while attending a Cato Institute event, hosted by Lawson and Powell, about the book. Unfortunately, I didn’t have time until now to read it. But I am incredibly glad that I finally found time to do so because they did an excellent job of creating a concise and easy to understand explanation for why socialism is a terrible system.

The most poignant lesson in Socialism Sucks, to me at least, is that equality is meaningless. As one could expect after reading Equal is Unfair and The Case Against Socialism, socialist countries are not paradises because of their focus on equality for everyone but the ruling class. Instead, they’re hellholes. Socialism Sucks makes that obvious by describing the beer in those nations; there is no consumer choice, so everyone drinks the same beer, if it’s available. So, in that respect at least, everyone is equal. But, is everyone happy? Nope. It’s a terrible product and the focus on equality means that no entrepreneurs have an incentive to take risks by creating a new beer; it would just be banned.

Americans need to remember that. Whatever way they would create equality, whether through an unconstitutional wealth tax or idiotic minimum wage laws, would just ruin our economy. That is because markets respond naturally to any outside stimulus, and they know that equal is unfair. That means that, as a result to outside and unnatural stimuli, markets will react naturally. They will utterly and completely collapse as a result of anti-market, socialist actions and forces on the market. That is just the way that nature works.

So, instead of following the lead of the perpetually failing socialist countries that have policies such as those, we should instead unleash the free market. It will make us wealthier and freer.

That is the point of Socialism Sucks. The point of the authors was not to prove any nationalist-type point that America is the best nation on Earth. That is not what Socialism Sucks. It is actually about why socialism is an awful, terrible, unworkable ideology. That is why the authors traveled to so many socialist states. In so doing, they showed that wherever socialism is tried, it fails. Utterly and entirely. There is no middle ground; socialism always fails and makes life miserable for those living under it. Robbing Peter to pay Paul can only work for so long.

Read Socialism Sucks. It’s not a long book and it’s incredibly interesting, so you definitely won’t regret doing so.