A common platform of various religious leaders and communities as well as entities working in the field of peace building and development, Interfaith Peace Federation of Nepal (IPFN) held its second general assembly on 20th December at Hardik Hotel, Kathmandu.

In the first half of the programme, activities and achievements made by IPFN in the last year were highlighted in the progress report by the General Secretary of IPFN, Dr. Mahendra Bhattarai. Similarly, Dinesh Babu Shrestha of Initiative for Transformation -Nepal presented the Audit Report of FY 076/77 on behalf of Treasurer Ven. Piyadarshi, whereas Mrs Seem Khan, vice-President of IPFN projected the programmes that will be undertaken the next year. In addition, she presented the plan to work in COVID response for peace in community in all 7 provinces with budget of NRs. 29,64,999 in partnership with Sansthagat Bikas Sanjal with financial support Bread for the World Germany. 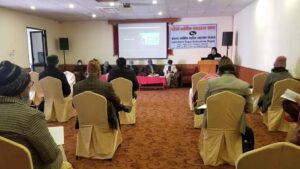 Then leaders and representatives from various religious communities like Buddhism, Hindiusm, Kirat and others shared words of greetings and wise words of wisdom about UPFN and the leadership team.

Kirat leader said Kirat is an ancient religion to protect which Kirat Dharma Sahitya Utthan Sangh has been set up 45 years back. This is a time not if activism, but of survival only, he said.  Buddhist religious teacher, addressing the assembly, said IPFN combined peace and interfaith two distinct concepts. These terms should guide the entity towards mobilizing towards peace among the very many religious communities. Peace in heart and mind should be the goal of the federation.

Though only a couple of year of being registered, yet it has achieved much, he remarked. Obstacles and oppositions may arise in our ways, which we should deal with kindly and move ahead, he advised.  Then Maulana Najurel Husen from the Islamic community, and Kamala Angdembe of Bishwa Kirat Nari Sangh addressed the assembly.

At the end of the General/Open Session, Rambhakta Kurumbang, Chair of IPFN, said IPFN will definitely take into heart the invaluable suggestions and comments made by the speakers, and will keep on working for interfaith peace in Nepal and globally too. 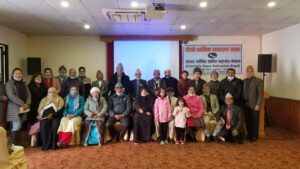 The programme was emceed by RC Bhattarai, Secretary of IPFN.

The Half Yearly Review was held today, with the member entities representatives and the Board to assess the achievements, and plan for the remaining period.