After a day of riots at the Capitol, Congress counted the Electoral College votes and confirmed the win for President-elect Joe Biden and Vice President-elect Kamala Harris.

US Congress confirmed President-elect Joseph R. Biden Jr.’s victory early Thursday morning, hours after a mob of loyalists urged on by President Trump stormed and occupied the Capitol, disrupting the final electoral count in a shocking display of violence that shook the core of American democracy.

President Trump, who spent months stoking the anger of his supporters with false claims that the election was stolen and refused to condemn the violent protesters on Wednesday, said early Thursday that he would respect the results of the election. 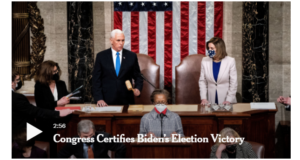 “Even though I totally disagree with the outcome of the election, and the facts bear me out, nevertheless there will be an orderly transition on January 20th,” he said in a statement.

There was no parallel in modern American history, with insurgents acting in the president’s name vandalizing Speaker Nancy Pelosi’s office, smashing windows, looting art and briefly taking control of the Senate chamber, where they took turns posing for photographs with fists up on the dais where Mr. Pence had just been presiding.

By the time the Senate reconvened late on Wednesday evening, hours after lawmakers had been evacuated from a Capitol overrun by rebels carrying pro-Trump paraphernalia, one of the nation’s most polarizing moments had yielded an unexpected window of solidarity. Republicans and Democrats locked arms to denounce the violence and express their determination to carry out what they called a constitutionally sacrosanct function.

“To those who wreaked havoc in our Capitol today, you did not”, Trump told his supporters.

President Trump- the most peaceful man in the world?!