Editor’s note: John Choi is the pseudonym of a believer from North Korea who now lives outside of his home country. Here, he gives a firsthand account of how the dictatorship in North Korea and the personality cult that surrounds the leadership there impacts how North Korean children think about the United States, Christianity, God and Jesus.

“Religion is the sign of the oppressed creature, the heart of a heartless world, and the soul of soulless conditions. It is the opium of the people.”

The quote is one of many from German philosopher and author Karl Marx. The leader’s socialist writings, including The Communist Manifesto, eventually inspired Communist movements all around the world.

I grew up believing Christians were evil and dangerous. We watched the government’s propaganda alongside public executions. It told us that Christians wanted to kidnap children and that the cross was evil.

Growing up, the first time I saw a man being executed was a Christian. They said he had smuggled Christian things into the country and had enticed people into the church. The whole village was told to come and watch. The children were allowed to sit at the front to get a good view. It enforced this belief that Christians were dangerous. 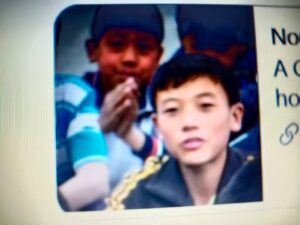 A cult of one family’s personality

When I grew up in North Korea, I also believed that Christianity was evil and that the cross was a symbol of the devil. Even in nursery school, we had to bow to the pictures of the first leaders of North Korea, Kim Il-Sung and his son, Kim Jong-Il. Today, North Korean children learn about and bow to current “Dear Leader” Kim Jong-Un, too.

As a child, I learned that Kim Il-Sung was able to catch a double rainbow with one hand because of his “majestic powers.” And, according to North Korean legend, his son Kim Jong-Il, was born on the mythical Paektu Mountain and “birthplace of Korea.” (Actually, he was born in the Soviet Union.)

Everything in North Korea revolves around the Kim family. North Korean children are brainwashed so that they will honor the leader of their day. In preschool, the teachers prayed to the leaders at lunchtime. We had to give thanks to the dictators for our “daily bread,” Now, I realize they stole this from the Lord’s Prayer. There’s even a (Santa Claus-inspired) story of Kim Il-Sung bringing gifts if you follow him.

The North Korean state wants their people to love only the Kim family and to hate the “American imperialists” and “South Korean puppets.” To increase the hate for North Korea’s enemies—which are the Americans (and in their view, all Americans are Christians)—the government of North Korea has produced negative propaganda. Films, musicals, paintings and cartoons portray Americans and Christians in a bad light. They “show” how the enemy has exploited and killed North Koreans.

Take this story from a North Korean textbook:

“A boy lived with his mother in a village in Korea. One day, he was carrying firewood from a mountain. He was passing by a missionary man’s apple orchard. All of a sudden, a strong wind blew through the orchard and apples dropped on the ground. The boy picked up an apple, and the missionary man saw it. He yelled at the boy and called him a robber. As punishment, the man also tied the young boy up and used chemical acid on the boy’s forehead to burn in the word ‘robber.’ The boy died because of the acid.”

Growing up, this story always scared me when I was younger. They used this children’s lesson to instill hatred of foreign missionaries. It stressed the state’s message: “Don’t trust the imperialists; assume these enemies always aim to conquer our country.”

Another propaganda engine aimed at adults was the 1966 North Korean film The Family of Choe Hak Sin. Most North Korean people, both inside and outside the country, remember this shocking story of a family who trusts Christian pastors during the Korean War. By the end, the pastors and enemy soldiers rape the daughters of the family, ruining the whole family’s life.

Through stories like these and other untruthful lessons, the cross became an evil image to children in North Korea.

The truth always comes out

North Korean children are learning so many lies. For example, currently, there are between 30,000 and 50,000 monuments throughout North Korea honoring the Kim family. Some are big; some are small. And the children think it’s their duty and honor to keep these monuments clean.

In fact, the country is already changing. Children are not so gullible as they used to be. Perhaps yesterday’s North Korean children were simply unaware of the different ways of life or forms of government in the world.

Today’s North Korean children are able to discover other beliefs and ways of life through escapees’ disseminated information, smuggled USB drives and foreign radio broadcasts in the Korean language. More parents are coming to faith and, when the children are old enough, they will hear about the Bible and the gospel.

I’m praying that God would open the eyes, ears and hearts of North Koreans of all ages. I truly believe that if believers throughout the world continue to pray with North Korean believers, one day all North Korean children will learn the truth about God and Christianity. One day, they will turn to the cross.