The World Watch List is Open Doors’ annual ranking of the 50 countries where Christians face the most extreme persecution. Explore the country profiles to find information, stories and prayers for each of the countries, along with ways that you can stand with your persecuted church family in prayer and action.

In brief
North Korea (1) 2021 marks the twentieth year that North Korea has been at the top of the Open Doors World Watch List. While Christians face the most extreme persecution there, Afghanistan (2) and Somalia (3) are not far behind.

Nigeria (9) Nigeria rises three places: more Christians are killed for their faith in Nigeria than the rest of the world combined. Violence in sub-Saharan Africa is also why DRC (40) and Mozambique (45) are in the top 50 this year, up from 57 and 66 respectively. 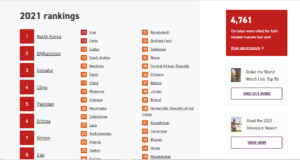 Sudan (13) Praise God, Sudan has fallen six places on the World Watch List – since former president Omar Al-Bashir was ousted, Islamic law has been removed and religious freedom is progressing.

Colombia (38)  Despite being a Christian country, increasing violence from cartels sees Colombia rise 11 places. It’s a similar story for Mexico (37), up from number 52 last year.

China (17)  China was at number 48 in 2018, and continues a dramatic rise up the World Watch List – believers are intensely monitored by the state, using sophisticated and oppressive technology.

Iraq (11) Violence against Christians in Iraq has increased sharply in the past year, which is why the country is four places higher than on the World Watch List 2020.

The persecution of Christians is getting more severe than ever, affecting increasing numbers of believers around the world. This overview of persecution trends will help give you a better understanding of the situation, and equip you to pray for your brothers and sisters following Jesus no matter the cost.

Covid-19 is used as a weapon by persecutors

Open Doors research reveals the extent to which Christians are being specifically excluded from receiving Covid-19 aid. Incidents have been recorded across Asia and Africa – where vulnerable believers are deliberately neglected by local authorities when food is distributed, Christian nurses are denied vital PPE, and some Christians are even baselessly blamed for the spread of the virus.

Of the top six countries where Christians experience the most outright violence, five are in sub-Saharan Africa. Nigeria – which re-entered the top 10 for the first time since 2015 – saw the most violence against Christians in 2020, with armed Fulani militants killing, burning, kidnapping and raping with impunity. Islamist violence is also why Cameroon rose to 42 from 48, and why Democratic Republic of Congo (40) and Mozambique (45) are new entries to the top 50. 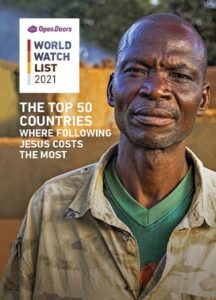 Increasingly, countries are using modern surveillance methods to monitor citizens for their own ‘protection’ and ‘security.’ In China (up to 17 from 23) a mix of new laws and increased surveillance have propelled it back into the top 20 for the first time in a decade.

Since the 2016 attempted coup against President Erdogan, Turkey (25) has pursued a much more open Islamist and nationalist agenda. Increasing violence and intolerance directed towards Christian minorities sees it rise 11 places. In India (10), rising Hindu nationalism continues to claim that ‘to be Indian is to be Hindu’.

Praise God, 2020 was a year of great news for Christians in Sudan. First, in July, the transitional government announced they would end the death penalty for people who leave Islam, as well as other reforms that repealed laws that violated human rights. Then, in September, the government agreed to remove Islam as its state religion – after 30 years of Islamic law. Most recently, Christian and Muslim religious leaders in Sudan have signed a declaration, joining forces to promote religious freedom.

This is an extraordinary and very welcome change for Sudan, which falls several places in the World Watch List (from seven to 13). Thank you so much for faithfully praying for your brothers and sisters in Sudan for so many years. There is still much to be done to tackle stigma and persecution from communities and families, but 2020 saw a huge leap forward for Sudan. Hallelujah!

Sri Lanka is no longer in the World Watch List Top 50, having fallen 22 places, from number 30 to number 52. That’s great news, and greatly welcomed after the horrendous church bombings at Easter 2019, in which more than 250 people were killed. Thankfully, nothing like this happened in Sri Lanka in 2020.

Though the pandemic has been used to persecute believers who were already vulnerable, it has also given thousands of opportunities to show Jesus’s love. That includes 283,000 believers in Asia who received Covid-19 food and aid, and hundreds of thousands in Africa too. Many were in desperate need, having lost their income due to lockdown restrictions.

And persecuted believers have been able to show the love of Christ to their communities too. One of the most powerful stories was of a Christian community in Sri Lanka who shared essential Covid-19 aid with their neighbours – including those who had recently physically attacked them. 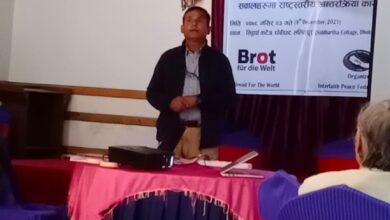