Janajagaran Party Nepal (JJPN) has strongly condemned the demolition of a church in Banke, Nepalgunj- by the police and the administration. 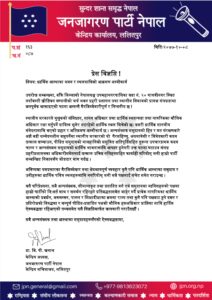 The press release video and the press note touches on the principles of human decorum, human rights and constitutional in criticizing the concerned authorities. Also, the party has demanded for a due restitution and restoration of the dignity of the hurt people of faith.

OpIndia’s article on ‘yellow journalism’ is a work of plagiarism

Mental Health issues to be addressed, not mythologized and stigmatized