In a landmark verdict comprising some 167 pages, the Supreme Court of Nepal ordered President Bishya Devi Bhandari to appoint Sher Bahadur Deuba as the successor of now caretaker Prime Minister KP Sharma Oli withing 2 days of the verdict, on 12 July. There was  an uneasy air of the fear of conspiracy and paranoia in some quarters, and a sizeable Nepali mass. But who dare disrespect the verdict of the apex court, given in black and white, in no uncertain terms?

Oli hosted a maudling, magalomaiac speech, and the president had to administer the oath of office to the new PM, albeit here mannerism proved totally unbecoming  to one bearing the office of the president! 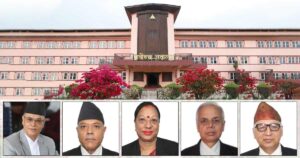 The C. Bench was formed of 5 justices, including the Chief Justice himself. The way the verdict has docuneted and presented the case- it is a historic decision and document as well.

A time to celebrate contitutionalism, rule of law, spirit of the separation of power, and a checka nd balance of the unholy nexus between the PM and the Presidents’ office.