Attended by officials and representatives of the three entities, as well as a good number of people from various groups, and a sizable number of mediapersons, the declaration program has created sensation and hope in the Christian community.

If implemented honestly by all the parties ninvolved, this agreement could be a historic, and history making one, as the speakers have already remarked this as a historic occasion.

The real and actual effect and result, and motive and reason for this move is yet to be tested and proven, but it has already created a moral booster,and also a pressure on other entities like mediapersons and political parties led by people from the same faith community. Some have expressed some misgivings that the reported registration of the new political party in the chairmanship of FNCN Chairman CB Gahatraj could be fatal and an immaturity by the other two entities. Yet one has to hope and work for the best at this hour. 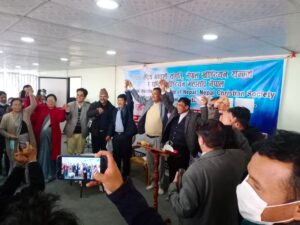