Andrea Minichiello Williams -Founding Director of Christian Concern UK and Christian Legal Centre- was busy in meetings, giving a workshop, interacting with and preaching at a Revival Conference in Kathmandu this week.

She met a select group of senior leaders, pastors, activists and lawyers on Monday evening. She heard about the reality of what is going on in Nepal and shared, from her heart, her experiences from 30 years as a lawyer and campaigner in the United Kingdom.

The following day there was a “Christian Concern Workshop” in Kathmandu where she covered topics as varied as Cultural Marxism, Human Rights, beginning and end of life, gender theory, and human sexuality and how they have impacted life in The West. The workshop and Conference was organized by United Christian Shepherd Fellowship.

Andrea also met the board members and staff of Freedom for All Nepal (FAN), a leading human rights organization in the country, and got updates on the activities, achievements and vision of FAN. She also shared how the secular, humanistic worldview of human rights ultimately creates a hierarchy of rights and ultimately fails to protect the most vulnerable persons- the unborn children. She also warned of the seemingly benign and inclusive language hidden in the constitution giving examples from

the United Kingdom of how that same language has been used to discriminate strongly against Christians in the workplace and, in some cases, criminalize the profession of the Christian faith in the UK. She made very clear that the seemingly neutral and egalitarian language of the constitution may not, in the end, be so neutral. She warned, starkly, of how one oppressive system could be replaced by another and gave examples of laws and cases in the United Kingdom to demonstrate this.

Finally, Andrea shared two sessions in the United Revival Conference organized by the United Christian Shepherd Fellowship where again she touched on the issues and challenged the church to boldly step forward without fear. She exhorted the church to confront

the rampant corruption and disciple the nation by being ambassadors for Jesus in every area of public life to influence and bless the society and the nation with good deeds and the good news.

At the end of her 4 day meetings and presentations, a Press Meet was held at the initiative of the scribe with MAF-Nepal (Media Advocacy Forum-Nepal) and some media persons. Andrea expressed great love and hope for Nepal and the people of Nepal, and challenged the church to raise up its influencers, and also warned of the influx of the intolerant, culrural Marxist ideology from the West.

The core organizing team consisted of Dr. Jomesh Wod (who played the key liaison role and introduced the speaker and Christian Concern England); Dr. Tej Bahadur Rokka who undertook the role of coordinating the Workshop and Conference and gave welcome speeches; Dr. Sundar Thapa, and Ps. Purna Rasaily, accompanied by Mr. Bidur Adhikari as the interpreter for Andrea.

Some photos from the Meetings, Workshop and Conference: 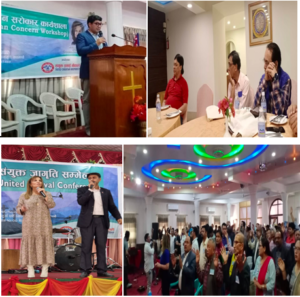