More than 360m Christians suffer high levels of persecution and discrimination for their faith. 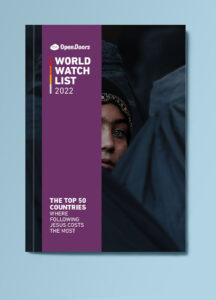 Afghanistan replaces North Korea (2) as number 1 on the World Watch List. Following the Taliban takeover in August 2021, Christians face certain death if discovered. Much of the Christian population has fled and the ones who remain are in hiding.
Despite dropping to number 2 after 20 years at the top of the list, persecution in North Korea remains absolute in every area of life. The 2022 World Watch List reports that persecution has reached the highest recorded levels in the country.
Nigeria has risen two places on the list, as Jihadist violence continues to intensify in Sub-Saharan Africa. 79% of the almost 6,000 Christians killed for their faith in the past year were in Nigeria. DRC(40) and the Central African Republic (31) join Nigeria in the top ten for violent against Christians. 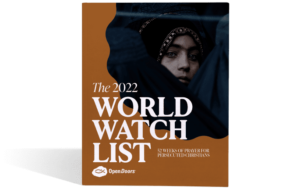 Violence in India continued at an extreme level, with very high levels of pressure exerted against Christians in all spheres of life. Impunity for violence and oppression continue under the rule of Modi and the BJP. Far-right Hindutva organizations continue to dominate the Indian public and political life with their extremist agenda.
Since the military coup in Myanmar, violence against Christians has increased. Despite the lifting of Covid restrictions, house churches have remained closed. The military sees church gatherings as an avenue for opposition.

Persecution of Christians has reached the highest levels since the World Watch List began nearly 30 years ago.

Islamic Extremism is expanding at an alarming rate.

The Taliban’s takeover of government in Afghanistan gave jihadists globally a profound psychological boost. In neighbouring Pakistan, the Taliban there was strengthened as Islamist groups celebrated. It signals a new impunity for Jihadist movements from Africa to Asia. This development is likely to encourage extremism in the Middle East, giving a boost to groups like Islamic State, Al Qaeda, throughout the region.

Sub-Saharan Africa continues to see the most violence against Christians.

Nigeria’s rise by two places in the top 10, is just one sign of the rising tide of Jihadist violence in the region. Colleges, schools, churches, villages and community leaders continue to be targeted for kidnappings, killings, injuries and destruction of livestock and livelihoods especially by Fulani militants, as well as known jihadist groups such as Boko Haram and Islamic State West Africa Province.

Jihadist violence also accounts for the re-entry of Niger into the top 50, up 21 places to no. 33. Insurgency is spreading into Niger and Burkina Faso, with Mali (24) rising four places because of increased pressure and jihadist violence.

Governments use technology to identify and oppress Christians.

Governments are using pioneering technology to surveil and control its citizens. Countries such as Sri Lanka, Myanmar, China and Malaysia. In India, Hindu extremists use social technology platforms to incite violence and discrimination.

The Covid crisis has been used as a cover to weaken the church.

In Myanmar and Qatar, house churches have remained closed despite the lifting of Covid restrictions. Under Communist ideology in the Americas, the pandemic continued to be used as a pretext to monitor churches and impose greater restrictions. In Vietnam, state and non-state actors used COVID-19 outbreaks to slander churches.