Pakistan got the test of its own medicine, so to speak, as the Isalmist terror outfit Tehreek-e-Taliban Pakistan (TTP) attacked the Pak military and claimed to set up its own government in Pakistan. 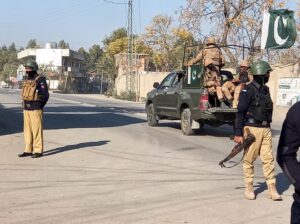 on Wednesday claimed the killing of a senior official of Pakistan’s premier intelligence agency and another officer, the latest in a resurgence of jihadist violence shaking the country.

The militant group which has a strong bond with the Taliban in Afghanistan has been attacking numerous government sites and the Pakistan military personnel lately.

The TTP, an umbrella group of militants that associates itself with Afghanistan’s ruling Taliban, ended a months-old ceasefire with the Pakistani government last year and launched a spate of attacks across the country.

Amidst the risk of western Pakistan being taken over by the militants and the potential division of Pakistan, the government seems to be corrned into taking a definitive harsh action against the Taliban on both sides of the border.

Ever since the return of Taliban in Afghanistan in 2021, Pakistan has witnessed a tremendous spurt in terror attacks from TTP, such as suicide bombings, kidnapping and even mass killings.
According to statistics published by TTP itself, nearly 1,000 people were killed and injured in attacks by by the outfit in 2022.

Pakistan government’s effort to bring the outlawed Tehreek-e-Taliban Pakistan (TTP) to the negotiation table received a major setback on Wednesday as the group threatened to target the top leaders of the two major political parties in the ruling coalition if they continued to support tough measures against them. The threat was directed at Prime Minister Shehbaz Sharif’s Pakistan Muslim League-Nawaz (PML-N) and foreign minister Bilawal Bhutto-Zardari led Pakistan Peoples Party (PPP).

“If these two parties remain firm on their position and continue to be slaves of the army, then action will be taken against their leading people,” the TTP, which is believed to be close to al-Qaeda and has ideological linkages with the Afghan Taliban, said in a statement.

It warned that “people should avoid getting close to such leading people.”

Claiming that the group was only waging what it called “jihad” in Pakistan, the terror outfit said “our target is the security agencies occupying the country”.

“Although Bilawal is still young, this poor man has not yet witnessed the state of war,” the statement read.

Bilawal Bhutto’s mother and former Pakistan prime minister Benazir Bhutto was killed allegedly by the TTP militants in a terrorist attack in 2007.

In response to all this, Pakistan military today attacked the Afghan Taliban sites and killed 11 Talibans.