Foreign ministry calls article ‘racist’ when announcing decision, which has been criticised by journalists’ association as ‘extreme’

China has expelled three Wall Street Journal (WSJ) reporters in response to an opinion article the newspaper published, which described the country as the “real sick man of Asia”.

Beijing’s foreign ministry said on Wednesday that it had revoked the press credentials of the journalists because the WSJ refused to apologise or investigate the matter.

China has criticised the opinion piece, which was published on 3 February, as “racist”. It comes amid reports of a spike in xenophobic incidents towards Asian people amid the ongoing coronavirus outbreak.

“In light of this, China has decided to revoke the press cards of the three Wall Street Journal correspondents in Beijing starting today,” he added.

Although the Chinese foreign ministry did not specify which journalists had been affected by the decision, the WSJ named them as its deputy bureau chief, Josh Chin, and reporters Chao Deng and Philip Wen.

Chin and Deng are both US citizens, while Wen is Australian.

Since foreigners are not permitted to work in the country without official credentials, all three must leave the country in five days, according to the WSJ.

The WSJ said the decision marked the first time in the post-Mao era that Beijing has expelled multiple journalists from the same organisation at once.

The Foreign Correspondents’ Club of China (FCCC) strongly condemned the move to, adding that none of them had anything to do with the article in question.

In a statement, the association described the action as “an extreme and obvious attempt by the Chinese authorities to intimidate foreign news organisations”.

“The expulsion of these three WSJ reporters is only the latest, and most alarming, measure authorities have taken,” the statement added.

The FCCC said it was now aware of nine journalists who have been “expelled or effectively expelled” from China since 2013.

Last year, another WSJ journalist did not have their credentials renewed – an effective expulsion.

Reuters were told by a source at the time that the journalist had displeased the Chinese foreign ministry by co-authoring a report on President Xi’s cousin.

The article, published on 30 June, said Australian authorities were investigating the relative for money laundering and other crimes.

China’s latest action against WSJ reporters comes after the US announced on Tuesday that it will treat five Chinese state-run media companies in a similar way to foreign embassies, requiring them to register their employees and properties in the US with the State Department.

Mr Geng said China was against this move, adding that Beijing has the right to respond. 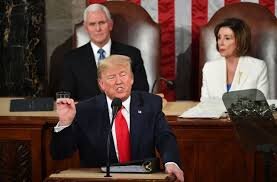 Trump on the US economy – State of the Union Address 2020